How Outlander Reinvented My Sex Life

The ridiculously popular tale centres around Claire Beauchamp (Caitriona Balfe), a post-WWII British combat nurse. On a trip to Inverness in the mid-1940s, she is magically transported through time to 18th century Scotland, where she meets and marries James Fraser (Sam Heughan), a young Highlander warrior. Romance, adventure, and very hot sex ensue—for Claire and Jamie, and, as it turned out, for me.

The couple has intense chemistry, and it’s infectious. After the second episode, I was screaming on Facebook, “WHEN DO THEY KISS?” By the time I hit the seventh episode, I was breathless. “Dan?” I called to my husband of 17 years. “Are you busy?” The more I watched, the more attractive my husband became.

Overnight, we went from “When’s the last time we had sex?” to Dan groaning “Christ, Julie, I’m not 25 anymore.” I had sex on the brain 24/7. My obsession became such that I started every conversation with, “Have you been watching Outlander?” Both my best friend and my car mechanic thanked me for turning them on to the show. Meanwhile, Dan was telling all his friends to have their wives watch Outlander. “You don’t even have to be in the room,” he insisted to them. “She’ll just call you when she’s ready.” I could not believe a television show was having such an effect on me.

Figuring out why led me to consider everything from the psychology of long-term relationships to the differences between spontaneous desire and slower arousal that needs a little encouragement. It also led me to reconsider both romance novels and unapologetic pornography. Both are so-called guilty pleasures that have a major presence online and can be set in any time or location. And both generally end up with the main characters having sex.

Dan and I have been together a long time. We have two kids, 12 and 14, and a three-year-old dog who has claimed the space between us on our bed. While our relationship started out pretty hot and heavy, time and adult responsibilities have somewhat dulled the spark. The sex, when we have it, is fantastic. It just seems that as time went by, our timing grew increasingly off. When Dan made advances, I was always tired. Sex was dependent on me initiating it, which didn’t happen all that often. We laughed that first night I jumped him post-Outlander, delighted by my newfound enthusiasm.

“In the beginning of a relationship, the hormones released in your brains make you want to be with that person all the time. It’s obsessive. You’re always touching or having sex,” says Dr. Laurie Betito, a Montreal-based clinical psychologist and host of CJAD Radio’s sex and relationship call-in show, Passion. “Fast forward 18 months or so, and those hormones have settled and you’re back to reality. Desire varies, especially for women. It’s something you have to work at.”

While men are more likely to have spontaneous desire (read: they often get turned on for no specific reason), women’s desire is more often “responsive.” “Women have said it forever—we need a storyline. We need context,” says Dr. Betito. “Romance me a little, charge me up.” And one thing female desire often seems to respond to is romance fiction, like Outlander, that blends sex and romance. This, of course, is the Fifty Shades of Grey phenomenon. That book started out as Twilight fan fiction before becoming an international success, eventually selling over 125 million copies and spawning four sequels and three movies. Almost every woman I know read that book, and their partners were thrilled. I missed out on that entire craze, refusing to read a book that I felt was beneath my standards. I also missed out on getting laid.

Read this next: The Best Sex Toys to Romance Yourself with

The notion of misaligned sex drives is something that frequently comes up in conversation. My friend Liane* is 48 and has been with her husband for over 20 years. She says, “Jason is always ready. I once picked up a box of condoms in the drugstore and he popped a woody, right there in the aisle.”

Liane and Jason have high-pressure careers, two kids and hectic lives. She readily admits that sometimes, it takes a little something extra to get her going. “What Jason doesn’t understand is that foreplay is 24-hours long,” she says. “Did he pick up his laundry this morning? Did he drive the kids to school? Was he able to avoid showing me his latest rash?”

All of this is very common, says Betito, but it can still be incredibly frustrating. “If you don’t understand this difference in a long-term relationship, one partner wonders what’s wrong with the other. ‘What’s wrong that you never want to have sex?’,” she says. “If he keeps pathologizing her, she’ll want it less. If he approaches her the way she needs to be approached, she’s far more open. If he understands that, it’s a very different interplay.”

Over the span of their relationship, Liane has turned to varying things to spark her own desire when Jason’s behaviour fell short. 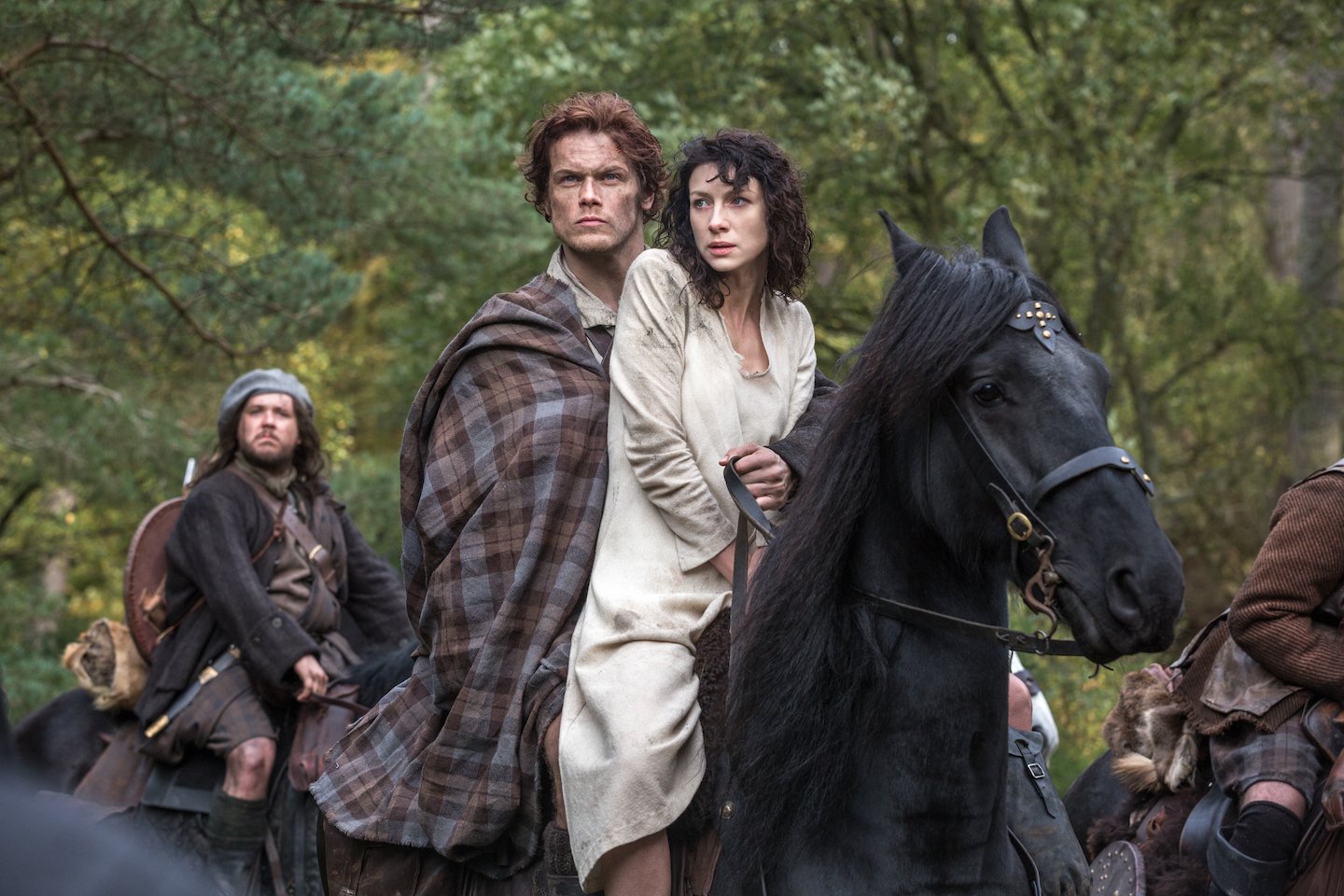 A friend advised to me “hold out for ‘The Wedding’ episode, then stick around for ‘The Reckoning.’” (Photo: Netflix Canada)

This got me thinking. My Outlander flashpoint was “The Wedding,” an episode in which Jamie first realizes that women are capable of orgasm. From that moment on, their relationship was no longer about his own pleasure, but all about ensuring Claire’s. I re-watched every sex episode multiple times. Eventually, I was just fast forwarding to the pertinent scenes. Then I stopped and asked myself—“Well, what’s the difference between this and porn?”There’s actually a lot of crossover between the two genres, according to Michael Castleman, who calls them “two sides of the same evolutionary coin.” Castleman is a San Francisco-based counsellor and journalist who’s been writing about health and sexuality for over 35 years and has studied the pornography vs. romance fiction issue. Put simply, one is used to “activate cues for male arousal” while the other does the same for female arousal.

Read this next: We’re in the Middle of a Pandemic, So Why Is My Ex Sliding Into My DMs?

She loves Lust’s XConfessions, a series of short films generated with viewer participation. Women anonymously send in written versions of their secret fantasies, and Lust produces the scenarios in her trademark cinematic style.

“He made me fast-forward to the sex scenes,” Katie laughed. “Essentially skipping over all the parts I needed to get going. But even if we’re not into the same kind of stuff, just the fact that he was willing to watch with me was a turn-on. It certainly reinvigorated our sex life.”

Getting both parties on board can sometimes require professional help, says Dr. Justin Lehmiller, an Indiana-based social psychologist and author who pens the popular blog Sex and Psychology. “Sexual desire discrepancy is one of the most common reasons couples seek sex therapy,” he says. “It’s important to get to the root cause, which might involve speaking with a professional. Other things that can help are focusing on the quality of the sex you’re having rather than the quantity. Some couples find it helpful to schedule sex or date nights, or to incorporate more novelty/excitement into their sex life.”

Audrey*, from Montreal, has also been with her husband, Barry, for over 20 years. They try to make an effort on even the smallest fronts: She looks him in the eye when she greets him and listens earnestly when he tells her about his day. “That connection is so important,” she said, echoing Liane’s comment about 24-hour foreplay.

Read this next: We Should All Be Following the NYC Coronavirus Guide to Safe Sex

Sexually, she’s into plenty of novelty, including pornography, and the couple’s sex life sometimes involves other partners. After a few casual threesomes over the years, they began “slowly” opening up their marriage, says Audrey.

“We’re really just wading into these waters, trying to figure out what the rules would be,” she says. “If he went on a ‘date’ would he have to ask permission first? Are there parameters around age? These are the kinds of questions we’re trying to navigate.

“I enjoy sex with both men and women, and I really enjoy watching Barry with other women,” she continues. And occasional dates with someone with whom she doesn’t share bills, or childcare duty, allows her to “just be me in the moment—get a break from reality.”

Lehmiller says it’s well-known that opening up long term relationships increases sexual desire. “Open relationships offer the opportunity for a steady stream of sexual novelty, and we know that novelty has a powerful effect on libido,” he says. That said, an open relationship might not seem like the obvious route for many of us.

“In order for it to work, the relationship has to be super healthy to begin with,” Betito says. “This is not a fix….As a couple, you must be able to separate sex from love.”

Audrey agrees. “Barry and I can separate the sex completely from our marriage, and this is something that works for us,” she says. “I’m in my 40s. I’m a grown woman, I know what I want, and I can tell him. In fact, he finds it a turn-on that I’ve gotten so direct about sex.”

That’s also true for me: at 48, I am having better sex than I was in my 20s, which Betito says isn’t rare. “Women have better sex after 40,” she says. “It’s not hormonal—that peak was at 18. It’s more about women being in tune with their sexuality and themselves.”

My favourite couple has also gotten better with age. When Claire returned to Jamie in season three, the sex was hotter than ever. I cannot wait to see what’s in store for them—and me—during the fifth season, which is just about to begin. Especially now that Dan’s agreed to let me call him Jamie.

*All names have been changed